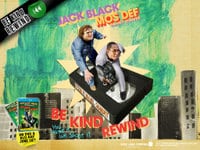 Kay and Kelly are somewhere in Rome this week traveling with friends, so I’ve got the house to myself for a couple of weeks. Well, not exactly to myself. There are two border terriers and a cat sitting in my office staring holes in the back of my head.

Sitting home alone last night I started channel flipping until I found the movie Be Kind Rewind with Jack Black and Mos Def. I’d heard it was good, and it didn’t disappoint. Here’s the plot, according to IMDb.com: A man whose brain becomes magnetized unintentionally destroys every
tape in his friend’s video store. In order to satisfy the store’s most
loyal renter, an aging woman with signs of dementia, the two men set
out to remake the lost films.

The two proceed to produce dozens of movies, from RoboCop to The Lion King to King Kong to Driving Miss Daisy, becoming neighborhood celebrities. It lloks like they’ll save the dying video store owned by Danny Glover until a lawyer (Sigourney Weaver) representing all the major movie studios shows up and shuts it all down

It’s a pretty good flick and mindless entertainment. But our brains are teleological, which essentially means we move in the direction of our current dominant thought. It’s sort of like when you start thinking about buying a new car, a Jeep Grand Cherokee, for example. You’ve never really noticed how many Jeeps are one thte road, but once you start thinking about buying one, you notice they’re everywhere!

As I said in my last posting, I’ve been giving "word-of-mouth" (WOM) a lot of thought lately. So, being teleogical I couldn’t help noticing when one of Jack and Mos’s happy customers (after watching their 20-minute version of Rush Hour 2) said, "I told all my friends and they decided they want to join your video store." His friends were lined outside the door and around the corner.

One of the things I’ve come to understand about WOM is that people don’t tell their friends about something common. It has to be uncommon…remarkable in some way. Jack and Mos recreated Hollywood hits in their own unique fashion and their customers loved it. We don’t call people the day after we saw an "okay" movie to talk about it.

People love to share something they’ve discovered, but only when it’s unique.