And So We Fight On 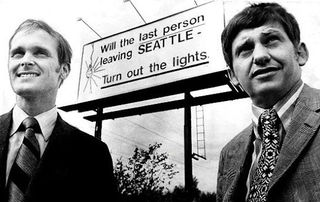 Of course, we're not the only ones being hammered by the economy. Everybody else is, too. I wouldn't want to be around Detroit right now.

It's easy to offer the panacea, "And this, too, shall pass." But when you're struggling personally, professionally, and/or as a business, that pablum is the last thing you want to hear.

As a marketing gunslinger, I'm looking for the Magic Bullet, just like you. I want to say in my speeches, in my articles, and in my client meetings, "I have the answer!" That would not only be a good thing for you (if I were right), but it would also make me the guru of the moment. (Word of advice: stay far away from anybody who says they have THE answer.)

Sadly, I don't have THE answer. All I can do is offer honest truths. I offered a few in my last post for 2008 and now I offer a few more:

"It’s tempting to think you’re doing well as a provider if you receive a satisfaction rating of a “4” (“somewhat satisfied”). However, we found that in every service area, Switchers—the purchasers who are open to switching providers—tended to give more “4”s (“somewhat satisfied” ratings). The Loyals tended to give more “5”s (‘very satisfied” ratings). So, clearly, that’s the score you want."

Like I said, I don't have THE answer, and nobody else does, either. But if you're in this fight for the long haul, these answers will help.