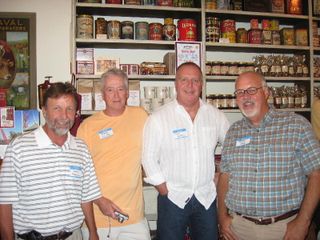 I recently attended my 40th high school class reunion back
in Columbus, IN. Yes, I graduated in 1969.

Columbus is a small town about 40 miles south of Indianapolis with a population of around 40,000. It's the home of Cummins, Inc., #206 on the Fortune 500, and NASCAR bad boy, Tony Stewart. And while it has spread out a bit, there really hasn't been a lot of change in the atmosphere and attitude of the Columbus I grew up with.

Amazingly, about 200 people showed up for the reunion. I won the award for traveling the farthest, dragging my gray hair all the way from Seattle. But I wasn't the only one who went through TSA security checks to be there. We had people come in from all over the US.

Why do people go to a 40th class reunion? Certainly, everybody has personal reasons. I wanted to play Otter Creek, a Robert Trent Jones championship golf course where I learned how to play and competed in many junior tournaments. But just as big as that was the desire to see the old gang, which, obviously, ranked high for everyone.

I caught up with Harold and Debbie, Steve and Judy, Randy and Nancy, John and Debbie, Johnny, Brian, Pam, Roger, Jean Harry, Lazaro, Amy, Jo, and many others. Everybody had a different story, took a different path, had highs and lows, and varying degrees of success. Some are captains of their industry. Some are still hourly workers. Many have grandkids. But we all had fun connecting.

And that's what marketing is all about. Connecting. Connecting with the exact right target market. Connecting in a way they want to be connected with. Connecting at the right time.

The next time you plan a marketing campaign, remember that. Remember first and foremost, those "targets" you're aiming at are people just like you. Connect with them as the people they are.