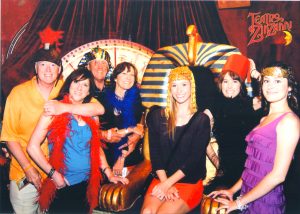 I can’t really describe this Uncopyable Rockstar. I’ll explain in a minute why that’s a good thing.

If you haven’t been to Teatro Zinzanni, here’s a quote from their website: “It’s a three-hour whirlwind of International Cirque, comedy and cabaret artists all served up with a scrumptious multi-course feast and elegant libations.”

As great as that sounds, it falls short of what it’s like to go to a Teatro Zinzanni show.

The word “amazing” is so over-used it pretty much makes me want to barf. Reality shows like “The Bachelor” would be out of business without it. (Our date was amazing! By the way there’s no way I’m giving you a rose.)

However, based on its dictionary definition, amazing is the word I have to use to describe Teatro Zinzanni.

Zinzanni is a great example of Steve’s saying, “The experience is the marketing.” Steve and I have been back again and again. We’ve taken groups of clients, friends and family. I’ve recommended it to others enthusiastically. But when they ask why, I  usually say, “Just go. You’ll love it.”

Here’s a behind-the-scenes fact: the show is indescribable by design. I heard it from the horse’s mouth, so to speak, when Steve had Zinzanni founder Norm Langill talk to a group of clients during a “Stealing Genius” meeting in Seattle.

Langill is a seemingly low-key guy, but talked passionately about how every single person in the theatre experiences each show differently. There’s simply too much going on at 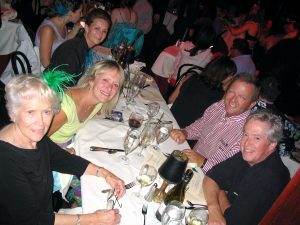 once for one person to capture it all.

Every performer is talented in their special skill. There are jugglers, contortionists, dancers, acrobats and musicians. But they’re also cast members who play a role and interact with the audience. Even during “breaks,’ there are constant activities and sideshows going on.

I found an interview with Langill that gives an enticing peek into the creativity and preparation behind each show. Once the show begins, the magic ingredient is added: improvisation. Each performer is brilliant at ad libs and theatrics, and they’ve learned the best ways to draw out audience members in a way that makes you laugh so hard it practically hurts. In a good way.

The interaction with the audience becomes the most entertaining part of the show (I’ll never forget one of our good-natured clients, Tom Herndon, being selected as one of the contestants for an “Elimidate” competition).

I’ll end by saying what I always do: Just go. You’ll love it.  I can’t tell you exactly what will happen, because it’s different every time. Even if you and I went to the same show, we’d each see something a little different.

And that makes Teatro Zinzanni an Uncopyable Rock Star.