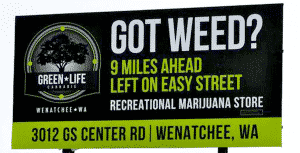 How many advertising media can you remember seeing as a kid that are still being effectively used?

We used to watch commercials on TV. Now we DVR the shows and skip the commercials. As for radio, most of us listen to Sirius, or podcasts, or play lists on our phones. Newspapers and magazines are fighting for their lives.

Today, most of the ads we see are online. Want to watch a You Tube video? You gotta watch the ad first. Do a Google search, and you’ll be re-targeted based on previous searches. Go on Facebook and you’ll see  sponsored posts in-between those photos from your friends’ fabulous vacations.

As far as media that worked then and now, Billboards are alive and well. These are low-tech stars in our high-tech world. Do people pay attention? I recently wrote about Uncopyable Rock Star Lee’s Discount Liquors in Vegas, which I’d never have known about if they didn’t use billboards.

The humble billboard stands tall, commanding attention while you’re behind the wheel and have nowhere else to look. Well, almost nowhere. When you’re driving, the temptation to look at your cellphone can be strong, but states are cracking down on their use behind the wheel. (I think that’s a good thing, by the way. The new laws save lives by forcing idiots like me to pay attention to the road.)

Billboards can’t contain a complicated message. But for the right product and message, they can be very effective.

Here in Washington, billboards have been highly effective for the pot industry. (Pun intended). Yep, Washington is the Evergreen state in more ways than one. Billboards work by delivering the simple message most marijuana stores want to convey: Want pot? We’re right down the road. The message gets the attention of their Moose, and invites them to take the next step. (Blinker, blinker, brake, buy.)

Until there are driverless cars and we don’t need to pay any attention to the road AT ALL, we’ll be looking up. We’ll see billboards. They’ll have a share of our attention.

When you’re marketing a product or service to potential customers, it’s easy to be compelled by the latest “shiny object.” SEO, Social Media advertising, Pay Per Click. The list, like the beat, goes on. But sometimes an underrated option is overlooked because it’s out of fashion. Billboards are still effective for the right product, market and message.