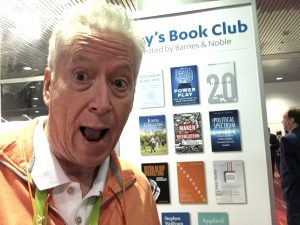 Steve and I were both thrilled that his new book, Uncopyable – How to Gain an Unfair Advantage Over Your Competition (you may have heard of it?) was selected as one of only eleven books to be featured at CES 2018. John Grisham was one of the other authors. It was a huge honor and a pretty big deal!

The book selection was part of Gary’s Book Club, named for Gary Shapiro, who is the CEO of CTA, which runs CES (had enough acronyms yet)? As you probably know, Uncopyable isn’t a book about technology. But if you’ve read it, you can appreciate its universal message on marketing and innovation.

It turned out to be very cool:

1. Steve has a long history with CES, first attending over 40 years ago. His dad was an exhibitor, and Steve was the teenaged son dragged along for cheap/free labor. That was back in the early days, before the show grew into the gargantuan Consumer Electronics Show. It was way before the name Consumer Electronics Show was shed, and re-branded as simply “CES.” (The word “Electronics,” once modern and futuristic, is understandably too dated to describe today’s cutting-edge technology.

2. For CES 2018, Steve got to drag his own kid along! At 25, Kelly is not exactly a kid. And that girl is nothing if not enthusiastic…she was excited to see the show and watch her dad’s big interview. 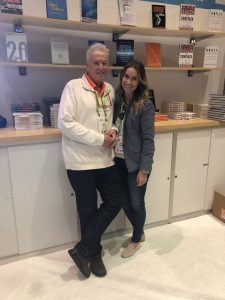 3. Steve was interviewed on the CES stage about his book. Afterward, there was an official CES book signing, with people stampeding wildly toward the Barnes and Noble booth to buy a copy. (I’d like to think there was a stampede, anyway. All I know is “Uncopyable” was the top seller, and by the end of the show the books were completely sold out. So I’m sort of filling in the blanks.)

4. Steve was interviewed by David Kretzman from The Motley Fool. After the show they invited Steve to visit Fool Headquarters to present to the staff and discuss further participation with them.

It also turned out to be uncool:

1) The morning of the CES interview, Steve wasn’t feeling well. I’ll skip the details, but it was either the stomach flu or food poisoning. Think back to your last experience with either. ‘Nuf said.

2) He somehow made it on stage…the interview started…and like a true champ, he rose to the occasion. Everything was going remarkably well. Kelly was in the front row, and reported that she couldn’t even tell anything was wrong. The whole thing was very impressive….right up until the time the power went out. 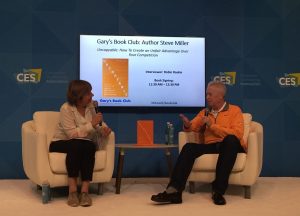 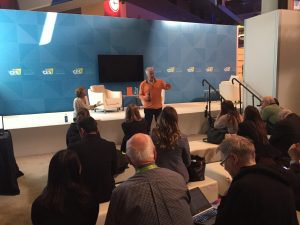 And that’s why the video ends abruptly, in the middle. Pretty ironic, right? The biggest high-tech event in America was brought down by a glitch in…electronics.

Yes, there were a couple of curveballs. But in the grand scheme of things, it all (mostly) worked out. The video is posted on the CTA site with a note about the power outage. Steve packed great info into the first 12 minutes and 43 seconds. And the Gary’s Book Club honor led to other media interviews that will help spread the word about Uncopyable.

One more thing that’s cool: YOU can watch the interview below. And after you listen, you don’t even have to fight the wild stampede to order a copy