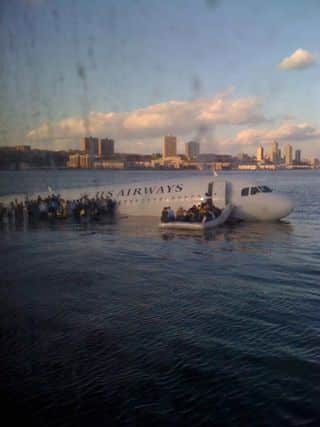 Talk about being in the right place at the right time.

Janis Krums lives in Sarasota, FL, but was in New York City today on business. He's a regular participant on Twitter and had posted a couple of tweets while in the Big Apple.

"Leaving the city, had a great day. Trying to beat the traffic. Wish me luck!"

"There's a plane in the Hudson. I'm on the ferry going to pick up the people. Crazy."

Attached to his tweet was the photo on the left taken with his camera phone. This photo is EVERYWHERE now.

In the 35 minutes between when he posted this photo and when he was interviewed on MSNBC, thousands of fellow Tweeters, including myself, shared and spread the news about the floating USAir plane.

Are you paying attention to the new tools of social media? Are you Tweeting? Are you LinkedIn? Are you on FaceBook or MySpace? Are you posting videos on YouTube and sharing photos on Flickr?

If you aren't, you're sort lagging behind the rest of us, aren't you?