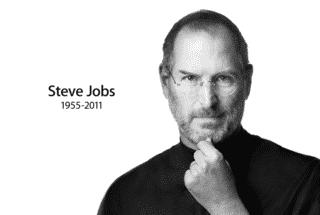 My heroes aren't so much people I put on a pedestal. They're people I would like to know personally and have long conversations with. I want to learn about how they see the world…how they see problems…how they see themselves…how they think. I know I could learn a lot.

I think Steve Jobs would be on that list. I think it would have been fascinating to spend an evening hearing about his path over the last forty years. From hiking through Nepal to starting Apple Computer to the original Apple I to the Macintosh to the iPod to the iPhone to the iPad…all the thinking that went into developing these amazing, world-changing products, as well as the missteps and failures in between.

I've been an Apple evangelist since 1984 when I bought my second computer, the Apple IIc. My first was something from Heathkit that required assembly and didn't do a lot. The Apple IIc changed my world and when I got the Macintosh Plus (still have it) I knew the rest of the world would never be the same.

I never did switch to PC, even during Apple's low years. It wasn't so much that I was stubborn. I didn't have to. As a two-person office with my wife, Kay, I could anything I needed to do on my Mac. I was comfortable and figured I would switch when and if Apple went away. They didn't and I've purchased at least 30 Mac desktops and laptops over the years, not to mention all the iPods, IPhones, and now iPads. My clients always knew I'd show up for a speech or meeting with the latest Apple toy.

How did he do that to me and the rest of the world? How did Steve Jobs come up with the coolest looking, easiest-to-use computer products over and over? How did he produce the exact right product that I didn't know I needed until he produced it? What else is in the pipeline right now that he started, but we don't know about yet. I'm not sure he would have been able to answer those questions, but I still wish I had the chance to ask.

IMNSHO, Steve Jobs was the Thomas Edison of our time. Part innovator. Part showman. I won't deify him, but he made helluvan impact on my/our world and that is impressive.