If You Aren’t Aggressively Using Social Media, You’re An Idiot. Or Not. 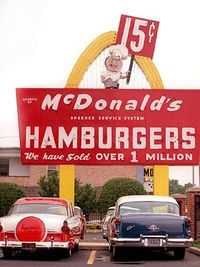 Yes, my mind is officially boggled. The statistics that continue to to be pumped out by the social media community (or should they be called the social media media?) are increasingly staggering:

And now we get this infographic from Social Jumpstart showing what's happening in 60 SECONDS:

OMG, if you aren't taking advantage of this incredibly massive online activity to promote your business, you must be a complete idiot!

As I told a recent audience at The Work Truck Show, this reminds me a of that old joke about the little girl who saw a giant pile of horse manure, jumped in the middle and starting digging. When asked what she was doing, she replied, "There MUST be a pony in here somewhere!"

Look, I understand it's easy to get fascinated by these huge numbers, but this social-media-is-awesome-for-businesses is getting out of hand. Don't fall into the new shiny object vortex without taking a deep breath and analyzing it from a reasonable, intelligent perspective.

So I'm going to take a bit of an Anti-Christ perspective about social media here and share what I think are important points you must consider.

In fact, for most businesses, huge numbers make it harder for you to find your best prospects. Like the little girl, you've got to spend time digging through it all to uncover the exact right people you want to see.

Most people are online, yes, but not in the way you want.

I asked my Work Truck Show audience how many were using Pinterest. Four enthusiastic people raised their hands and I asked how they were using it. "For cooking ideas!" "I love the design pictures for the home!" I asked if any were using it for business. They all shook their heads no.

Social media is not a mini-press release mechanism.

Here's an example of the wrong use of Twitter:

If this is how you're using social media, just stop it. Stop it right now before you get hurt.

Most social media "experts" only carry a hammer

And so everything looks like a nail. Ever notice how direct mail specialists think direct marketing is the best tool? That's because that's all they see. And way too many social media "experts" have drunk the koolaid of Facebook, Twitter, and Google+. BTW, how many social media "experts" are you aware of who can show proven, measurable, cash-in-the-bank results from their consultations, books, speeches, and webinars?

Most social media "experts" think the media is the beginning

The first question any good strategic, or marketing, or branding consultant should ask is "Who is the target?" Social media "experts" see the media as the first part. The formula goes like this:

1. Who is your target market? Define them as clearly as possible. (BTW, if your answer is "everyone," don't quit your day job.)

2. What message do you want to share with them that will get them to raise their hands and want to talk with you?

3. What media should you use to most effectively communicate with your target market? Your quiver is filled with a myriad of different types of tools. Social media is just one category or group that is in that quiver. Find the best one and use it first.

Market is first. Not media.

Don't kid yourself, social media is a HUGE time sucker and most companies don't have the luxury of a full-time social media staffer. If you're in that boat and you want to play in this space, then you must carve out of agiant chunk of time to do it right. You want to play on Facebook, Twitter, YouTube, and LinkedIn? Figure one-two hours per day MINIMUM. And don't think you can post something and walk away. Social media thrives on current and new information.

BTW, if you happen to be that full-time social media person and you want to keep your job? Figure out a way to prove ROI. If you can't do that, then just assume your job is temporary.

Look, I'm not saying stay away from social media. It's a tool, pure and simple. For some of you it might work today. For most of us, we need to do a better job of figuring it all out before diving in. Just make sure you go through the proper due diligence first. Keep your eyes wide open and don't get caught up in the Shiny Object Syndrome that's struck so many companies these days.

Personally, I've spent a lot of time trying to figure out how to make money off social media. I'm an early adopter, because I need to know what works now and what's going to work for my clients. I built up a Twitter "following" of over 10,000. So what? I'm still chasing this social media thing, but I believe most businesses, especially those of you in the B2B world, are a long ways away from figuring it out. And when we do, don't worry, I'll be right on top of it!

If anybody tells you social media is working for them, don't ask to see how many friends, fans, or followers they have. Ask them to show you the money.