Shocking News: Starbucks Is Not Your Friend! 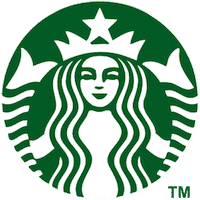 I'm sorry, gang. I didn't realize how long it's been since my last post! How time flies when you're having fun, right?

I've had a pretty full end of Summer between family and work. I spent eight days in Chicago for the 2013 International Manufacturing Technology Show. It was AMAZING. Held every other year, I've consulted for them now for something like 20 years. This year's event was OFF THE CHARTS successful! It was HUGE. It was packed with attendees and exhibitors. It had an abundance of awesome, value-add experiences for everybody.

The big thing was attendance was up over 20% from the previous show. This is a big deal because it's all about manufacturing. Ultimately, manufacturing drives the economy, so this was great news. I think we're picking up steam.

After returning from Chicago I received an email from one of my way cool BFFs, Rikka. What a cool name, too. If I had a name like Rikka, I would just go by that one name, like Madonna, Liberace, and Jell-O! I don't even know if Rikka is a guy or a gal, but it doesn't matter. Great name.

Anyway, Rikka sent along a story about last week's announced changes to the Starbucks Rewards program. Apparently, they've pulled a bit of a Netflix on their most valuable customers. Rikka sent along the link to the announcement page, so I could read it and the reactions from customers.

In a nutshell, Starbucks has "added" two benefits:

How to take advantage of these amazing new benefits? Here's what the website explains:

And voila, your drink or food item on your ticket will be free.

As I'm sure you can imagine, something else must go to make room for these incredible new benefits:

To add these benefits, as well as to continue to invest in future innovations, we are saying goodbye to a few benefits.   Beginning on Oct. 16, we will no longer offer free syrups and soy, or a free tall beverage with a whole bean purchase.

But Starbucks will still keep other amazing benefits:

We are keeping many of the benefits our customers have appreciated – including a free birthday beverage (or a free food item), free refills for coffee and tea and a personalized Gold card for our Gold members.

You can have my personalized Gold Card when you pry it from my cold, dead hand.

Unfortunately, an awful lot of ungrateful Starbucks customers don't appreciate these changes. Specifically, there are 714 Comments on that page. I looked very quickly through them and counted just the negative ones. I came up with 714. Here is a sampling: 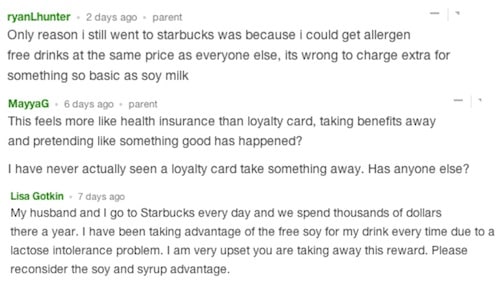 I googled the topic and found a story on Wired.com. I particularly liked the photo caption: "Membership has its privileges, but not as many as before." Damn, wish I'd thought of that one.

All seriousness aside, I guess I'm getting used to this type of attitude about customers (and voters). I don't get pillows on American Airlines anymore, even though I have five million miles. We're paying for our baggage to fly on almost all airlines. Facebook doesn't quite share everything in their IPO. Netflix…well, it's still Netflix. And don't even get me started on Comcast and AT&T.

Is it fair that Starbucks pulls the plug on immediate rewards, like flavors, soy, and a free drink with bean purchase? Actually, it just doesn't matter if we think it's unfair. It's an irrelevant question. Starbucks has the right to do whatever it wants to do as long as it's not illegal. They have the right to give us rewards and they have the right to take them away. When I wrote about Netflix's dumb decisions, that's all they were…dumb. And I would say, in this instance, Starbucks is dumb, too.

However, I think there's something much more fundamental here and it makes for a great business lesson for all of us. We think Starbucks has made a dumb move, but in reality, Starbucks has simply shown us its true colors. This was clearly a financial decision. The cost of giving Gold Rewards members a slightly shorter path to a free reward is more than offset by the savings in free flavor, free soy, and the free cup of coffee with bean purchase. It doesn't take a rocket scientist to figure that out.

Companies, like Starbucks, Netflix, American Airlines, and too many more to count, make decisions based on bottom line results, not how we feel about them. Starbucks and gang are not our friends. They show that through decisions, like the new Rewards program and the condescending message sent out by Matthew G, their Director of Global Brand Loyalty. He doesn't even give us his full name, unless maybe he's Kenny's brother.

The basic premise for Two Hat Marketing is this: the dumbest thing we can do in business is think like a marketer. Marketers are people, like Matthew G, who put on the marketer's hat, then discombobulate the English language and spin their message to make it sound like they're doing great things for the customer. I'll bet MG and his other last-name-challenged cohorts laughed and giggled all the way through that copywriting session.

Are you treating your customers the same as Starbucks? Are you putting on your Marketer's Hat in the office, making similar decisions, sending out similar insulting circumlocution, and feeling smug about it? Or do you take off that hat and put on your customer's, because you truly want to do right by them. You want to make as much profit as possible, to be sure, but not at the cost of insulting the very people who make that profit possible.

Which hat are you wearing today?