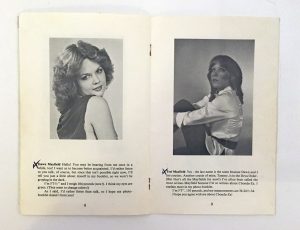 Have you ever heard about a scam so good that even after it was exposed, the victims didn’t want it to end?

It happened, and there are some Uncopyable Lessons to be learned.

You might be familiar with the story of Don Lowry and his “Angels.” Lowry was busted back in the 80’s, but I only heard the story recently. It was featured on the NPR podcast, The Hidden Brain, hosted by Shankar Vendantam.

(If you’re not familiar with it, The Hidden Brain talks about human behavior in a way that’s pretty darned riveting. I listen regularly to justify guilty pleasures like reading People Magazine and Binge Watching The Crown. And yes, I suppose The Crown could be considered educational.)

The Hidden Brain episode about the Angel Scam is called Lonely Hearts.

You can also read the transcript, here.

The con in question was invented by Don Lowry, a gravelly voiced chain-smoker from Iowa. Lowry, who died in 2014, wrote fake letters to lonely men, posing as various women he called “Angels.”

“The thing that fascinated me about this story is that when the con was finally exposed, many of the victims were heartbroken. They wanted it to go on. They wanted to go keep believing,” says host Vendantam.

Along with being a law-breaking criminal, Lowry was a pretty brilliant marketer. He did some things Uncopyable Marketers can learn from: he found a hungry target market, discovered their pain, and developed an attachment by providing something they desperately wanted. Here are some things Lowry did right, as he was doing wrong:

He offered a solution to their pain. His victims felt alone and lonely. He gave them what they wanted: to feel special and know someone cared about them.

He developed an attachment. The guys got letters, written by attractive women who were concerned about them, encouraged them and made them feel important. They would never drop out of the subscription. They were hooked.

Here’s an excerpt from one of the letters, written to a man named Jesse:

“Dear Jesse, deep down, you know as well as I do that you could be a lot better off than you are if you only had someone on your side, someone who would help you, encourage you, work with you, and stick with you even when things get bad. What I’m talking about, of course, is a true friend. But that kind of person is hard to find today, isn’t it?”

The letters were generic. If the recipients had been looking, there were plenty of red flags. But they weren’t looking.

There was a charge for the service, and the “Angels” would commonly ask for more money. Eventually the con morphed into an even more unlikely scenario – A “Church of Love.” Lowry was eventually caught, but some of his victims were so disappointed they actually testified on his behalf at his trial.

The episode is definitely worth a listen. It demonstrates the power of defining a target market, offering a solution to their pain, and building an attachment.

That’s the power of being Uncopyable.