“Now YOU have a friend in the jewelry business.”

That line, delivered in Tom Shane’s distinct voice, is Uncopyable.

I used to think Tom Shane’s slightly nasally, yet earnest and friendly voice, was annoying. But I’ve come to enjoy this staple of radio in the Northwest. I heard it again recently when we were in California. I recognized it instantly.

If you live in one of Shane Co’s markets, you’ve no doubt heard that voice too. Shane Co is the largest family-owned retail jeweler in the US, and Tom Shane’s voice is featured in the longest-running radio ad campaign in the country.

During his commercials, Tom Shane connects personally with the listener.  He boldly compares Shane Co to the competition. He tells us exactly how and why we’ll get more for our money when we buy from Shane Co. Their stones are more beautiful, he tells us.  They have more sparkle. Every stone is hand-selected in Antwerp, Bankok, Tel Aviv or Mumbai. “Those other guys buy our rejects!” he proclaims. 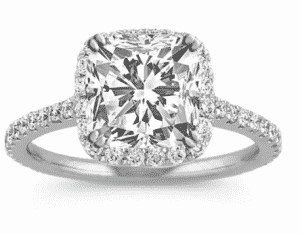 Shane says the company delivers a better value by eliminating the middle man. That message may be copyable, but the delivery isn’t.

By using radio, he explains in this blog post, the customer can imagine exactly what THEY envision as the most beautiful style of jewelry, rather than seeing an ad with someone else’s definition. Shane reminds us in commercials that the company stands behind the product with a lifetime warranty, has non-commissioned salespeople, and features the largest selection of diamonds in every market they serve.

The commercials use humor, and are sometimes admittedly corny. Free lifetime cleaning is like “a spa for your jewelry,” he says. Last year’s holiday commercials featured clueless men who “blew it” by getting their girlfriends or wives utilitarian gifts like vacuum cleaners. Then, Tom Shane got the women on the phone to find out what they REALLY wanted – and of course it was jewelry.

Tom Shane’s commercials are entertaining, and even if contrived, communicate a real-life and approachable quality that’s inviting to customers who want an easy, low-pressure buying environment, and the best bang for the buck.

Shane says he knows there are people who hear his voice and immediately change the station. But when they’re in the market for jewelry, they pay attention. They immediately connect his voice with the company. And that makes Shane Co commercials, delivered by the one and only Tom Shane, an Uncopyable Rock Star.