The Old Rules of Business That Still Matter: Rule #3

This is Part 3 in my series, The Old Rules of Business That Still Matter. Previous Rules can be read by clicking these links:

Old Rule #1: It's All About People

"This can't be right," I said to my buddy, Doug. "It's looks like we're just heading into the swamps."

Doug was driving the RV and we'd just taken Exit 64 West off Interstate 4 in Lake Buena Vista, FL. It was Spring Break 1972. Doug and I were students at the University of Arizona and we got the "brilliant" idea that it would be great fun to drive non-stop from Tucson, AZ to Orlando, FL for the week. We planned to check out both the Florida beaches and Walt Disney's newest theme park, Disney World (WDW).

Disney World had opened just a few months earlier in October 1971, and for some odd reason Doug and I'd gotten this burr in our behinds that we wanted to see what Walt had dreamed up before he died. We'd both been to Disneyland in Anaheim several times, but heard the new park was really different.

Getting off I-4 we quickly realized this WAS different. At first, I thought we'd gone the wrong direction. As soon as we merged onto World Drive, the scenery went completely green. Absent the wall-to-wall cheap motels so prevalent around Disneyland and with very little signage, our anticipation built. The occasional roadside directional shaped in Mickey's head told us we were, in fact, headed in the right direction – the Magic Kingdom was straight ahead.

We approached the parking lot, assuming we'd see the familiar Cinderella's Castle spire looming close by. But we didn't see it. Quickly shuttled to the ticket booths, we found out we still had to take the Monorail to the main entrance. We'd already driven six miles from the interstate and STILL had a couple of miles to go!

Disembarking the Monorail, we handed our tickets over and walked into the entrance of the Magic Kingdom. NOW it became more familiar. Mickey's giant flowered face smiling down on us; hundreds of guests jostling for just the right camera angle. Doug and I headed through the somewhat dark tunnel, past the large posters featuring the Jungle Cruise, the Haunted Mansion, the Pirates of the Caribbean, until exiting into the bright sunshine…and Main Street! 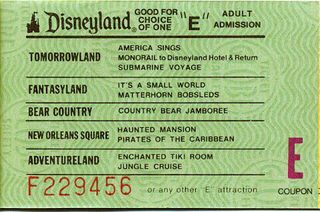 To say we were blown away by Disney World 1972 is an understatement. We rode Space Mountain about 15 times. (They didn't have THAT in Disneyland!) We hit every E-Ticket ride we could, occasionally doing a D-Ticket, throwing away those stupid A, B, and C kiddie rides. We literally ran from Main Street to Tomorrowland, over to Frontierland, then Adventureland. From there we ran back to Tomorrowland and started over again. We immersed ourselves in WDW, collecting photos, stories, and memories for back home. Yes, we were a couple of typical college guys, but in the Magic Kingdom we were wide-eyed, ten year olds. I seem to remember we even bought some ears.

Disney World was cool! And even though 95% of Disney World was pretty much the same as it's west coast cousin, I believed it was way cooler than Disneyland! It was different.

The thing I didn't understand at the time was that Walt Disney was actually unhappy with Disneyland. Walt hated the environment outside the park — the dozens of unmatched, cheap motels…the low budget fast food restaurants…the souvenir stands…the low-class look and feel of the immediate area. When Disneyland opened, these businesses weren't around, but as tourists poured into Anaheim, outside entrepreneurs jumped on board.

Walt hadn't controlled the environment. He realized that. And he was more than annoyed at what he perceived as a negative first-impression people got when they came to the Happiest Place on Earth. He couldn't help but believe this had a major impact on their overall experience and he promised himself that if he built another park, that wouldn't happen.

The story of Disney's surreptitious trips to central Florida, buying up huge tracks of swamp land through multiple dummy corporations is legend. But he wanted to ensure he owned enough property that nobody could make the same negative impact. Walt Disney wanted to control as much of the guest's experience as possible – starting with the moment they pulled off Interstate 4. He knew first impressions had enormous impact on the customer's ultimate experience.

This same attitude of managing the entire customer experience permeates Disney in everything they do still today, but nothing approaches how they manage it at their theme parks around the world.

Whether they are designing a new park, a new ride, a new restaurant, a new hotel, or even a new retail store, the Disney "imagineers," have two missions — one spoken and one unspoken. The spoken mission is to deliver "Awesome Arrivals and Fond Farewells." Delivering an Awesome Arrival helps manage a guest's expectation and influence their mood. As Doug and I drove through the uncluttered greenbelt surrounding WDW, our feelings of anticipation grew. We were focused on having fun. We knew we were going to have fun. 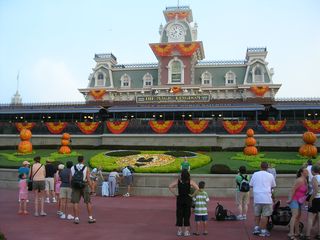 Our anticipation only grew when we parked and realized we still had a ways to go. It grew more as we boarded the Monorail and as it drove right through center of the futuristic Contemporary Resort catching a quick glimpse of the 90-foot, floor-to-ceiling ceramic mural. We knocked over several slow children and strollers as we ran down the ramp to the front entrance. Neither of us noticed that the concrete in front of the giant flowered Mickey was painted red, as a red carpet welcome to the Magic Kingdom (or did we?) and I didn't think much of the dark tunnel plastered with posters designed exactly like movie "coming attractions." At least I don't think I did.

And did either of us really get the walking out of the tunnel into bright sunlight and "Wham, there's Main Street!" first impression and how it was exactly like the first time I walked through the tunnel at Comiskey Park and was blown away by the stunning bright green grass and enormity of a major league baseball park?

Disney brilliantly manages the entire experience. We arrive to an Awesome Arrival. We walk down the RIGHT side of Main Street. All the shops on the right side are planned to enhance your arrival and upcoming experience. Simple stuff – snacks, hats, sun screen, cameras, quick dining. Nothing too big to carry during your day and all the stuff you might have forgotten.

The Fond Farewell is the other side of Main Street. As you leave, you can now buy souvenirs, clothing, jewelry, golf apparel, logoed dinnerware, and Mickey's Moonshine (ok, I made that up). All designed to enhance the fantastic memory of your day in the Magic Kingdom…and make you want to come back.

But the spoken mission is only half of the grand design. The "unspoken" is actually greater. 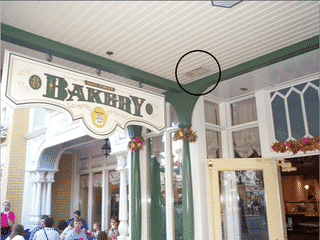 Customers are not called customers. They're Guests. Employees are Cast Members. The rides are a blast, but for many the wait in line is just as entertaining. That delicious aroma emanating from the Bakery? It's artificial — pumped into the air through the outside vent over the door. There aren't any ovens in the Bakery. Have you ever seen a Frontierland cast member walk through Tomorrowland? Nope, you haven't. And you won't. The underground Utilidor is a tunnel system throughout the Magic Kingdom, allowing cast members to appear and disappear through innocuous doorways. It would be incongruent to allow any mixed messages.

There's a reason why Disney is so often used as a great business example. They get Rule #3 of the Old Rules of Business That Still Matter:

EVERYTHING WALKS THE TALK

Disney is different from other theme parks and they work really, really hard to stay that way. They understand the critical importance of the first and last impression, and they also understand how everything else that is connected to their name (their Brand) has an impact.

You say you're different from your competition, but does everything walk the talk? What does your business card look like? Is it different? How do you answer the phone? The same as everyone else? What’s the first impression people get from your company…your “cast members”…you? What about your literature, your website, your email sig file? You’re different? As Seth Meyers would say, "Really?"

Look at your company through the new eyes of prospects and customers and remember:

EVERYTHING WALKS THE TALK

PS: I've received amazing response to my Old Rules series, including many suggestions and ideas for inclusion. Keep them coming! I also said I'll give credit even if I already have the idea. Another BFF, Bev Patient, nailed Rule #3 when she sent in, "You never get a second chance at a first impression." We can never hear that enough. Thanks, Bev.

Please keep sharing with your friends and enemies. Please keep "liking" me. Please keep sending in stuff you think I'd like. Help me stay interesting and relevant!