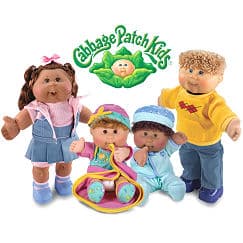 To fill in those of you consarn, fresh-faced whippersnappers too young to know what I'm talking about, the Cabbage Patch Kids (CPK) were the brainchild of a guy named Xavier Roberts who later sold the distribution rights to Coleco Toys (you can read the full story on Wikipedia).

To say the CP Kids were a little hot that Christmas would be like saying Kim Kardashian has had minor cosmetic surgery. Near riots and fist fights broke out in toy stores across the country for the hard-to-find dolls. The Cabbage Patch Kids taught Elmo everything he knows about managed scarcity.

While the CP Kids dominated the news and the girls side of Santa's deliveries, I was personally involved in one of the hottest selling toys on the boy's side. I worked for a small, Japanese manufacturer named Shinsei Corporation. We manufactured radio control toys. In a brilliant move, we licensed the rights to manufacture a 1/8 scale replica of the top-selling Honda 250 3-wheel ATC (All Terrain Cycle), naming it the Dust Runner.

Unlike most low-cost radio control toys (under $100) at the time, the Dust Runner was rugged and well-built. It popped cool wheelies, was fast, cornered on a dime, could indeed go off-road, and took a serious beating. Demonstrating it to prospects, I would grab the antenna and just throw the Dust Runner across the pavement. Setting it upright, I'd hit the gas and off it would go. We created a new category for the stale radio control toy industry. Kids and Dads loved it and it became a giant seller.

All of a sudden, this 31-year-old was recognized as a wunderkind in the toy industry. I was on the cover of trade magazines, touted for my foresight, and lauded for my ability to "know" what boys wanted. Oh yes, I was a smart cookie.

Clearly, I knew what I was doing and had the Midas Touch. Looking for my next smash hit, I discovered another type of RC never manufactured before – a radio-controlled ball. That's right, a BALL. It was about ten inches in diameter and had no external antenna. It was very weird to watch this ball roll all over the parking lot as if it had a mind of its own.

I KNEW I had my next Dust Runner. I ordered my new "GoBall" into production with new, expensive die-cut packaging, confident it would equal or beat the success of our Dust Runner. I was so smart, I didn't need to take a prototype around to Toys r Us, K-Mart, and Montgomery Ward for their opinion.

My "can't miss" GoBall sold worse than the Zune and Tinkles the Toilet Cat. More boys probably bought Cabbage Patch Kid dolls the next year than bought my brilliant product.

The GoBall failed for so many reasons, but most of all, it failed because of my blind arrogance. I'd had a big hit and became convinced I had the magic touch. In other words, I broke the tenth Old Rule of Business that Still Matters:

Last week I wrote about the head-shaking moves Netflix has made lately and many of you commented. We look at Reed Hastings' decision-making and subsequent non-apology and wonder how he can't see the damage he's doing to his brand. This week Bank of America's announcement to add a $5 monthly charge for debit cards smacked of the same arrogance.

The more I thought about all this, the more I was reminded of my own GoBall debacle. My unwarranted conceit taught me a lesson I'll never forget and, I hope, never repeat. It's okay to pat yourself on the back and develop self-confidence. It's not okay to let yourself become convinced you are smarter than everybody else, especially your customers.

None of us are that good.