Microsoft proves it sucks at marketing, too

I have to admit even I was SHOCKED by what I saw Microsoft do (or maybe "didn't do" is a better way of putting it).

If you've followed my blog for a while, you know I often rant about how competition doesn't create innovation. It creates conformity. In pretty much every industry I've spoken for or consulted in this is true (and I've worked in 123 different industries). Corporations, large and small, get "new" ideas by simply watching the competition, copying what others do, thus creating a strategic orthodoxy within that industry. Examples abound!

But Microsoft has taken this to a whole new level.

If you haven't heard, Microsoft is opening retail stores in malls across the US. You know, like Apple?

But this in itself isn't why I'm shaking my head. Getting into retail is probably something Microsoft should have done earlier, and, in fact, is something more and more manufacturers are doing in many different industries. Nike got the ball rolling many years ago before Apple jumped in. Now we've got Sony, Bose, Franklin Covey, Lionel Trains, and others. Heck, even TIDE has gotten into the act, opening their own dry cleaners! (Of course, clothing companies have had their own stores for years and I'm not even counting the outlet mall stores. And isn't "outlet mall" an oxymoron?)

But here's the thing. Microsoft's new retail stores are almost IDENTICAL to Apple's. Check this out:

The front is identical. 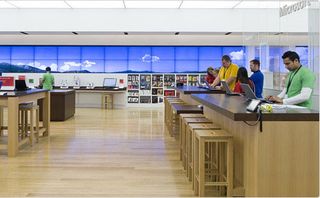 The inside is identical.

Microsoft has an "Answer Desk" that looks identical to the Genius Bar ain an Apple Store. The employees all wear colorful t-shirts with ID lanyards, identical to Apple's. And the stores are strategically located as close to the Apple Stores as possible. In the Mall of America, it's directly across.

It goes on, but here's the kicker. According to the Electronista: Gadgets for Geeks website:

The company has made no reservations about the stores being meant to imitate and potentially lure away customers and has gone so far as to have a Genius Bar equivalent, the Answer Desk, and to hold high-profile openings. In many cases, however, the company has used concerts as bait to lure parents that might not otherwise have shown up.

Uh, they had Miley Cyrus for the Bellevue Square grand opening. The first 1000 people in the door of the Microsoft Store got two tickets to her show. Ya, Miley lured the parents. (I think the second 1000 got FOUR tickets.)

Does Microsoft think they can beat Apple by imitating them and putting stores next to them? Do you?

I'll tell you what I think. I think Microsoft's Business Development division spent several years trying to come up with a retail concept that would beat Apple. I think they knew that anything they built HAD to BURY Apple in wowness and coolness. And I think that every idea they came up with was an obvious failure. I think the Microsoft team eventually realized they were never going to beat Apple trying to out-innovate them. Nobody is going to out-innovate Apple right now. Someday somebody will, but not any time soon and it won't be Microsoft. I mean, come on, have you SEEN the Zune?

I think somebody very high up in the Microsoft chain came up with the brilliant idea of copying Apple on purpose and announcing that it was the strategy all along. And that same somebody thinks they can win a game whose rules were created by Apple.

Okay, innovation is hard. It's really hard. Microsoft proves that. But Peter Drucker said that business has two, and only two, basic functions – marketing and innovation. So, if you're going to be successful in the long run you'd better get good at both. Here's a tip to get started. Look at what your competition is doing and don't do it.

Come on, Microsoft. Is this the best you can do?