Marketing Lessons from the Election (So Far) 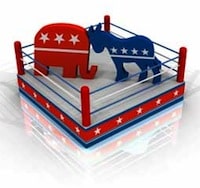 We're still over two months away from the 2012 Elections and things are really getting ugly, don't you think? Clearly, it's going to get worse, maybe a lot worse!

But there may be a marketing lesson we can learn from while we watch this imbroglio. As much as I want to think the Democrats and Republicans are a bunch of whiney dweebos, in reality the brain trusts behind Obama and Romney are using some very proven marketing strategies.

I had a very short experience campaigning for Bruce Babbitt while I was a student at the Unversity of Arizona. Babbit ran for State Attorney General in his first ever political race and I was tapped to help garner the college votes. I was privileged to be on the inside of many strategy discussions that ultimately led to Babbit's election.

One of the things I learned was people are almost always drawn to invest themselves in politics out of a personal grievance. Maybe something terrible happened to a family member. Maybe a beloved park was sold by the local government and turned into a mall. Maybe somebody's mother was denied medical care because of some legal loophole. Whatever the reason, people usually got involved for a personal, emotionally-charged grievance.

Campaigns are built around hitting our emotional hot buttons. True, many of the "pledges" made by candidates focus on how much better off our lives will be under their leadership, but the way the message is delivered is designed to strike a nerve…to touch on that pain, that grievance that makes us emotionally connect with the person who will help.

I've always felt that pain was a great motivator. When we are able to clearly identify a painful situation, a nagging problem, anything that keeps our prospects staring at the ceiling in the middle of the night…and we are able to offer a solution…well, we win the election.

2. Pick your target and just talk to them

I remember when politicians talked as if they could help everybody. I don't know who was the first to figure out that was a bad strategy, but that was a smart guy or gal. None of us can help everybody, so we need to choose our targets and carefully craft our messages just for them.

Obama wants to raise taxes on the "rich." At least that what appears to be going on here. But, as a marketer, I see something simpler happening. Obama has grabbed a "grievance" from people who are not rich. Those greedy, rich people need to be brought down a peg! They've got more money than they'll ever need, so we should just take it from them, give it to the government, and that will mean less out of OUR pockets! Playing their own version of the game, the GOP has a "Countdown to Bankruptcy" targeting the date Medicare is supposed to run out of money.

Obama has very intelligently targeted a minority of voters, targeted them as a mutual enemy with the majority, and HE will lead the charge. He's accomplished both #1 and #2 in one swoop. Will it work? I certainly don't know, but he is playing that game. And that's a marketing strategy we can all learn from.

I used to watch campaigns with distaste. I'd change the channel when political commercials started. This year I'm taking a different tactic. This year I'm going to watch the whole thing from an observer's perspective. I'm going to observe it all and look for ideas I can steal for my own (and your) use.

Who knows? I might even enjoy the whole experience for a change.