The Marketing of Kelly Miller, Golfer 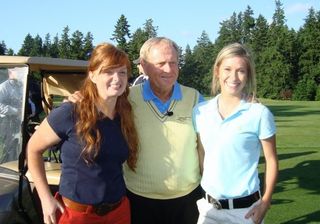 Many of you know my daughter, Kelly, is a nationally ranked junior golfer. Yes, that’s her on the right with Jack Nicklaus and one of her best friends, Alex. (Jack was working on his game and asked Kelly for some tips.)

Kelly’s a senior in high school this year, which, for most seniors, means it’s time to start looking at college. Kelly, however, started thinking about it over two years ago when she announced to me and Todd, her golf instructor, that she wanted to get a scholarship to play golf in college.

Think about the odds. According my research there are roughly 235 Division I and 90 Division II universities with girls golf teams. (BTW, Kelly is my daughter and I know she turns 18 in two weeks, but she’s still my little GIRL. Always will be.) The NCAA allows each school to have a maximum of six full scholarships at any one time. (They can split those scholarships up, if they want, but for my purposes here, I’ll keep it simple.) 325 total teams with six scholarships each means there are roughly 1950 total girls on scholarship. That includes freshmen, sophomores, juniors, and seniors. Dividing it out, that means there are, on average, 487.5 total scholarships available each year. Considering the thousands of girls playing high school golf these days, odds of grabbing one of those 487.5 scholarships are slim. Certainly a handful of girls (maybe 50-75) have reached the superstar status and every coach across America is aware of them, but for most girls, like Kelly, it’s not that simple. Achieving Kelly’s dream was going to be tough.

Stepping back and taking a higher altitude look at it, however, reveals that the problem we have is very similar to the problem you have, too. It’s a MARKETING problem. Essentially, we want the exact right target prospect (the coach) to buy Kelly (the product). How do we do that?

Look at the top banner on this page. Below the Two Hat Marketing title you’ll see my definition of marketing:

Looking at Kelly’s situation as a marketing problem, we created a strategy based on this formula.

Kelly’s the product, obviously, but when she told me and Todd she wanted a scholarship, she was no where near the caliber of player coaches were looking for. In marketing terms, the product wasn’t good enough. We immediately set out a plan for Todd to work weekly building her game to a higher level. We then went out and had Kelly fitted for a new set of custom-designed clubs. We also outlined a practice strategy for Kelly to use on a daily basis to ultimately become the high quality player her target market was looking for.

In almost every marketing situation, this step is done first, and Kelly was no different. At what level did she want play in college? What size school did she have in mind? Where in the US did she want to go? What were her academic interests? And many other questions.

Initially, Kelly didn’t really know all the answers. What junior in high school does? She did, however, say she wanted to play Division I and probably in western US. This helped narrow down the list. We also culled out the top 20 elite level schools. We want Kelly to enjoy the full college experience and not make golf her job. This cut the list down to about 40 schools.

We researched this list to learn as much about the schools, coaches, and teams, as possible. With any target market, it’s critical to find the best prospects and I believe the best prospects are the ones who already know they NEED your product. I’ve written about this before (see Find a Need & Fill it? Not!) Not every coach had a need. We had to find the ones who did.

I believe most marketers fall into a trap of loving certain marketing tools. (Ooooh, email is so easy and it’s cheap! Let’s use that ALL the time!)

The fact is it really doesn’t matter what you or I think is cool. The only thing that matters is what the prospect thinks. Do college coaches get too many emails? Does Lindsay Lohan know how to party? Using just emails would be a big mistake.

As most marketing gurus will tell you, the magic is in the mix. So we looked for as many effective ways to communicate with our targets as possible. (I, by the way, do not call myself a guru. I AM a legend in my own mind, however.)

We used Referral Marketing. We contacted everyone we knew who might have some type of college golf connection and asked if they knew any college coaches on our list. If they did, we asked for an introduction and reference. It turned out, many people did! These coaches became our top prospects because they trusted our referrals.

We used online resources. Junior golf has several websites where you can create online profiles. Coaches use these websites to uncover players they haven’t heard about and track their results.

We built a website for Kelly <https://www.theadventure.com/Kelly-Miller> where we listed her golf accomplishments and tournament results. In addition, we produced a demo video of Kelly hitting various shots, so coaches could see her swing.

We entered Kelly in national golf tournaments on both the American Junior Golf Association tour and the Future Collegians World Tour. Admittedly, this was our most expensive marketing tool. But this gave Kelly the opportunity to play against the best junior golfers in the world and coaches closely followed tournaments results. Coaches often came out to watch players in these tournaments. The first year Kelly wasn’t as good as most players, but has improved dramatically this year.

We made several unofficial visits to universities to meet the coaches and visit the campuses. NCAA rules are stupidly restricting. For example, we can call coaches all we want, but they can’t return your calls until the July 1 before the student’s senior year. Even then, they can only call her once a week. At tournaments, coaches can’t talk to the players or parents. But we can make unofficial visits and have personal contact. This gave these coaches one-on-one time with Kelly and got her on their radar screens.

What do coaches want to hear that will influence their decision? Obviously, they want to hear about scores and tournament results. They also want to know about who Kelly is — her academics, her interests, and her goals. They want to know how Kelly will fit into their program and with the other players on the team. Kelly has a great personality, if I do say so myself, and we worked at showcasing that as a giant plus to her game. We also regularly sent Kelly’s upcoming tournaments and encouraged coaches to come out and watch her. Many did.

This is always the most difficult to figure out. We can identify our best prospects. We can have the perfect product for them. We can use the best media. We can send the best message.

But we all know timing is everything. Do the coaches have room for her on their 2011 team? Do they have a scholarship available? Until we make direct contact with the coaches, we don’t know. However, once we have, we can whittle down the list even more.

The Result So far

So where are we at this point in the recruiting (marketing) process? Kelly has two major tournaments left on her schedule. Both are this month. Our other efforts continue.

As of today, Kelly has invitations to make official visits to three Division I schools. This is a big deal. Official visits are actually paid for by the school, so these coaches are very serious about Kelly. Next week Kelly plays another out-of-town tournament where another Division I coach has committed to watch her play. I’m guessing Kelly will get an invite from her, too. Kelly is allowed a maximum of five official visits.

Obviously, we’re hoping Kelly gets offers from all these schools. Having three or four interested increases both the odds as well as the potential size of the scholarship. But until Kelly gets the actual offers, we won’t know. The earliest students can sign a National Letter of Intent is November 10, so we have roughly three months left in this pursuit. (I’m sure Kelly has a preference of which school she attends, but the offer will make a difference, too)

Creating and implementing Kelly’s marketing strategy has been a blast for us. I’ll keep you posted on the final results.