In 25 words or less, tell me what you’re doing for the next 12 months 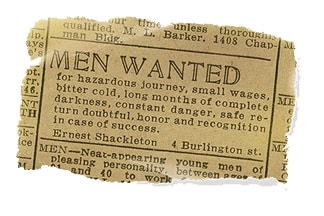 Chris Brogan led me to the amazing storyteller, DYKC, and this post on his blog:

The sum total of descriptive words in this want ad is twenty-five.
Twenty-five words opened the door to any man who dared brave the
unknown. Feeling a sense of adventure, I stepped through and discovered
epic tales of expedition.

In 1907, Ernest Shackleton issued a challenge. Journey with him,
literally, to the ends of the Earth. A perilous trek where death was
imminent, and if you survived, the promised reward of honor and
recognition.

The early twentieth century ushered in the great race of National
Antarctic Expeditions, and British, Scottish, and German explorers
answered the call. Glory, for himself and his homeland, the prize for a
champion who could successfully conquer and claim the frontier known as
the South Pole.

From 1907-1909, Shackleton’s Nimrod expedition defied the
odds to extend mans reach towards the South Pole. When Shackleton
stopped, both he and his landing party were a mere 97 miles from the
objective. It was the furthest anyone had traveled into the antarctic.
A noted failure with a marked victory.

Was the adventure worth the risk for the members of his landing
crew? The estimated salary for the entire shore-party was 6055£. Evenly
divided amongst the recorded count of sixteen men, spread over three
years, the individual expedition pay equaled low-down dirty wages.
For the sum total of $175US per year, what sort of dangerous (and
possibly life ending) scenarios would you entertain? Some people could
barely make a decent grocery run to Whole Foods for a single week at
that rate.

Over a century ago, men danced with fate on the final frontier,
daring to boldly tread further than any man before them. Would an
opportunity to make history, today, be worth the stretch? Could you
relish the Shackleton experience and accept small wages for a chance at
honor and recognition, in case of success?

It's often written that the definition of the ideal job/career is one that you would do even if you weren't paid for it. How often are we challenged and revved up in our daily work where we feel we're working on something that makes such an enormous difference?

Here's the thing. Do you provide a product or service that helps someone in their own daily work? Do you improve the efficiency or effectiveness of another business? Do you help them make more money? Save more money?

If you are, then guess what? You're making an enormous difference.