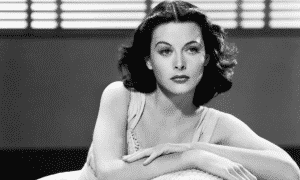 What do you know about actress Hedy Lamarr? There’s more to Lamarr’s story than the average person assumes – myself being an average person.  The surprising truth – that she was an inventor who used the concept of Stealing Genius – is revealed in the movie “Bombshell: The Hedy Lamarr Story.

Before I watched the movie, I didn’t know much about her. I vaguely remembered she’d once been called the most beautiful woman in the world. (And wait… wasn’t there a character with a similar name in Blazing Saddles?)

Bombshell covered Lamarr’s life as a movie star, including multiple husbands and the predictable drama. But Lamarr wasn’t only a stunning beauty and gifted actor. She was a super smart inventor. (It’s kind of not fair that she had both beauty AND brains.  She’d probably argue that it also wasn’t fair that her real name was Hedwig.)

If you’ve read the #1 Amazon Best Seller, Uncopyable – How to Create an Unfair Advantage Over the Competition, you know “Stealing Genius” is an innovation strategy. Stealing Genius refers to looking for ideas outside yourself, your industry and your world.  Stealing Genius forces you to look for ideas in unusual ways, instead of just copy-catting your competitors.

Lamarr’s most famous invention was a communications technology referred to as “Frequency hopping.” It was utilized in WW1. She was the co-inventor, along with a gentleman named Georg Anthiel. The two received a patent for it. The basic idea is still in use in GPS, WiFi and Bluetooth.

That’s pretty cool. But Steve and I were most impressed with another invention: faster airplane wings. Howard Hughes was a friend at the time, so this was obviously before he became a hermit who didn’t cut his fingernails. Hughes (or Howie, as she may have called him),  was trying to make his airplanes fly faster. Lamarr was intrigued, and wanted to help. In an impressive Stealing Genius move, she decided to buy two books; one on birds and one on fish. She studied their efficient movement through air and water. Then, she applied what she learned to airplane wings. She ended up changing the shape from square and boxy, to a more aerodynamic design that could indeed fly faster.

Here’s a clip of Hedy Lamarr telling the story.

The movie is interesting, and I recommend it. Whether you watch it or not, it serves as a good reminder. As you look for innovative ideas for your business, use the concept of Stealing Genius. You just might come up with an idea that changes everything.