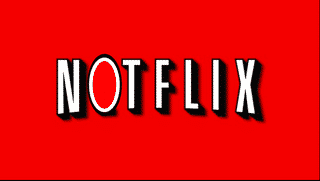 Sometimes I feel like a writer for comedians, talk show hosts, and Saturday Night Live during a political campaign or when Bill Clinton was president. When it comes to corporate CEOs and businesses, the jokes just seem to write themselves.

In Notflix's Netflix's case, it's not laugh out loud funny, but more like funny business and just plain unbelievable arrogance. I find it simply amazing how some people just don't get it. In this case, I'm talking specifically about Notflix's Netflix's decision to raise rates by 60%, split the company in two operations, force customers to go to two websites and get two bills, naming the "new" company Crapster Qwikster, and of yes, CEO Greed Reed Hastings recent "apology" to customers.

How have we reacted? Badly. In three months Netflix's stock price has plummeted from a high of $304 to $130. The Starz network dumped them and now customers are. Thousands of past customers commented on Greed's Reed's posting and I didn't find many "Gee, THANKS for the changes!" One of my BFFs, Dave Staal, vented to me:

I haven't found myself more perturbed as a customer than I have over this Netflix thing.  I grudgingly chose to keep my streaming service with Netflix because there's nothing to really adequately replace it but quickly cancelled the DVD portion as soon as they notified the public of the price increase.  Now I have this spite for them and feel like "Just you wait Netflix – as soon as something comes along that I can replace you with I'll happily do so."  The letter doesn't affect me as a streaming customer but I still find it irritating somehow.   I think it's poorly written in general and it really doesn't seem to be an adequate explanation for anything – which is what he says he's going to provide at the very start of the letter.  If I were a DVD customer I think I'd really be upset over the name change, the two charges I'll now see on my CC statement and the fact that I now have to go to two different websites in order to manage my account.  Not only have they increased prices (substantially percentage wise) but they've doubled my effort as a consumer without adding any benefits at all!   Anyway, the fact that I'd even write this email to you inquiring about your thoughts on the subject is an indication to myself of how irritating I find this whole thing.  Maybe I'm over-dramatizing but I seriously think that this could become something that's later seen as one of the worst self-destructive business mistakes we've seen in a while. Time will tell I suppose.

How could Netflix get in this situation? Once upon a time there were dinosaurs. Dinosaurs did not have videos to watch at night, so they died. Without video neanderthals tried storytelling by the tribal fire. Apparently the stories weren't the caliber of today's Hollywood scripts and they died, too. Kings and Bishops with no videos to watch at night created decades long Crusades to pass the time. History clearly proves the need for video.

The lack of video enabled many inventions to be, uh, invented. Without the distraction of Caddyshack, Twilight, and Spice World, people had time to think. I believe it's safe to say the airplane, the telephone, the computer, and the Shamwow would not be around if video had been available.

When video finally arrived, it was still primitive. We had to actually GO to a movie theater to watch moving pictures. Then a very smart person realized he could bring his own camcorder to the theater and record the movie while sitting in the audience and, bam, a new industry was born. We could watch video at home! This was very exciting, but it was a hassle having to go to the theater, recording the movie, and then taking it home. The problem was exacerbated by the different camcorder formats – Betamax, VHS, 8-milliliter, DVD, Cinerama, and Smell-o-vision.

Along came new ways of delivering video to the addicted minions – small local mom-and-pops named Bob's Video Palace and Classic Video, eventually going belly-up like T-Rex when Hollywood Video and Blockbuster came along. These were smart people running these big businesses, but apparently not smart enough., because they made room for Notflix Netflix. Creating a business model like no other, clearly Greed Reed Hastings was the smartest guy in the room. All by himself he managed to show what dinosaurs the brick-and-mortars really were. He found a true pain point we all suffered from and hated (late fees!) and built a video behemoth. Subscribe to Netflix for $8.95 a month and get as many DVDs as you wanted delivered to you by mail with no late fees. We LOVED Netflix!! They could do no wrong. Greed Reed was one of us!

Ah, but as we all know, those who don't learn from history are condemned to repeat it. What history am I talking about? Don't start believing your own press releases. The dinosaurs, the neanderthals, the kings, the Blockbusters, the Friendsters, all thought they were smarter than everybody else, but now they are just history.

Netflix a dinosaur, you ask? Well, what business is Netflix in? Apparently, Mr. Hastings thinks they are now in two businesses – one is delivering DVDs by mail and one is delivering movies via the internet. It's an old cliché, but that's just like the railroads thinking they were in the train business. He doesn't understand that from the consumer's perspective he is only in one business – delivering movies.

I want to watch a movie that appeals to me when I want to watch it. If that movie is in a theater and I think it would be fun to see and experience in a theater, then that's what I want. If I don't feel like going out, but would still like to watch a movie, I want to be able to do that, too. For quite a while, Netflix has filled the second need for me very well. The service has been good and the price has been fair. The streaming choices have been pretty bad, but we are patient with new ideas.

Have other options come along? Ya sure you betcha. Redbox made getting a DVD even easier and cheaper. But many of us developed a loyalty to Netflix and looked forward to the streaming part.

We know loyalty is the Holy Grail for businesses. Developing loyalty is really hard. Once you've got loyalty, you still must work hard to keep it. Loyalty is based on trust. Cultivate it. Care for it. Nurture it. And never, ever do anything to lose it. We al know loyalty and trust are very easy to lose and then very difficult to get back. Did Hastings forget that?

Netflix built a big business because the other options opened a door for them. Guess what Netflix is doing now? Hastings has opened a door for other businesses to take those customers away. Does he think there aren't other companies waiting to take advantage? Apparently, that's exactly what he thinks, which means he is now a dinosaur.

And don't even get me started on that stupid name Cricketster… I mean Clipster… no wait, Crampster… aargh…