Direct Mail Is Not Dead Yet 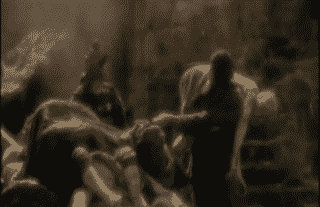 One of my favorite movies is Monty Python and the Holy Grail. I understand this gives you a much better picture of my infantile sense of humor, but I can't help it. I'm a guy.

One very funny scene is "Bring out your dead." Set in the days of the Knights of the Round Table, a man leads a cart filled with dead bodies through the streets. He clangs on a pot or something, crying out, "Bring out your dead!" People come out of their homes and dump the dead in the cart.

One man walks up to the cart carrying a second old man over his shoulder:

Cart Man: "I can't take him like that. It's against regulations."

First Man (to Cart man): "Isn't there something you can do?'

The Cart Man walks over and clunks the old man on the head, killing him.

First Man: "Ah, thanks very much."

Extremely funny stuff to those of us who also love Caddy Shack, Animal House, and Blazing Saddles.

I was reminded of this scene when one of my BFF's emailed the comment, "I don't use direct mail anymore," while asking which tools she should use.

I'm providing a detailed response in my monthly message to my MIB Club members, but felt it was important enough to touch on here. I can boil it down to this sentence:

If you are not using or have stopped using direct mail, you are making a BIG mistake.

Saying direct mail doesn't work is like saying elephants aren't big. Direct mail can and should be one of your top tools for building new business and communicating with current customers! Here are five reasons:

1. My mail box isn't as crowded as my email inbox.

And your's isn't either. The first job of marketing is to get the attention of the prospect. That's REALLY tough to do with email (AND social media). With regular mail, I can easily grab someone's attention because there is no Spam Filter for mail. A personal letter, greeting card, fat letter, or bright orange envelope almost always get opened.

2. A piece of mail can be much more personal.

Emails all look the same. Oh sure, you can design up something with colors and pictures, but I still have to open it. Even then, it's still just electronic data. A letter can be hand-written and hand-addressed. That's VERY personal. Even a large envelope or package can hold mystery and "I wonder what's inside for me!"

Why are 3D movies so popular now? Because they bring you closer to actually being there. They add another sense to the experience. Mail is completely sensory. It's visual. It's three dimensional. It can have smell, if you want. It can be very tactile.

4. Mail can have multiple response mechanisms in one piece.

I've had great success with Reply Cards, fax-back forms, 800 numbers, and, yes, email and website addresses in my mailings. How do my customers prefer to contact me? I let them choose.

5. No CAN-SPAM Act to worry about.

I've been active online for almost twenty years now. I bought my first domain when they first came available in 1995. When email got started I was one of the first to see the potential for easy, free communication. But, as we all know, spamming became a real problem, so the government passed the CAN-SPAM Act of 2003. Clearly, it didn't stop the true spamers from bombarding us, but recent updates have set up possible troubel for all of us.

…they can still report you as a SPAMMER if they feel like it, and your service provider is required by law to record it as such.

Did you know that? Direct mail doesn't have that problem.

Of course, direct mail isn't sexy anymore. It isn't the new shiny object, like anything online is. But for me. I don't care about shiny objects. I care about results.

Which is more important to you?