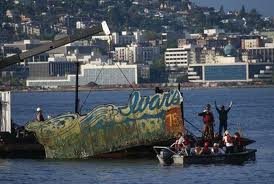 I love great publicity stunts, especially when they're totally congruent with the brand. I love them even better when they can almost be taken seriously. One oustanding example in the Seattle area a few years ago was the "discovery" of an old 1950's billboard for Ivar's fish-and-chips fastfood chain. It was found deep underwater off Seattle's Alki Beach. To celebrate finding the artifact, Ivar's sold cups of clam chowder for the 1955 price of 75¢ for one month.

It was a hoax. But it was a hugely successful hoax. Ivar's sold 83,000 cups of chowder that month compared to 19,000 the same year before. The fake story was carried throughout the Puget Sound by all the media. It was an incredible publicity heist founder Ivar Hagland would have loved. While alive, he was basically Seattle's own PT Barnum.

I'm sure this stunt was prompted by the Lululemon's yoga pant debacle. I can't help but think, however, this may have been a planned April Fool's joke anyway and the video was already in the can. It was just too good of a moment to wait another week, though. When life tees one up for you, you've got to take advantage.

So here's something to think about. The next time there's an event or a story like Lululemon's, why not sit down and brainstorm how you can take advantage and have some fun? You can create a pure promotion, like Ivar's did (creating their own publicity), or you can create publicity designed to get people to click to your site. Then design a squeeze page just for that story.