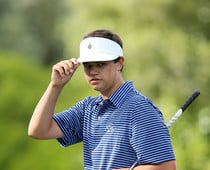 One of the big stories at last week's U.S. Open golf championship was 17-year-old Beau Hossler. Beau made a good run at the professional and much older leaders through the whole tournament. He was on national TV a LOT and, as you'd expect, became a trending topic on Twitter.

Interviewed on TV and asked about how he (and apparently his hot mom) were blasting the Twitterverse, he replied:

“I don't use Twitter that much,” said the Twitter trender wither (sic) more than, 3,500 followers as of Sunday evening. “Don't really know how it works.”

What? A 17-year-old who doesn't understand Twitter? Doesn't he understand what he's missing out on?

Oh wait, maybe he does…